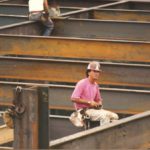 Ken Mitchell started climbing steel in his late teens mostly across the eastern United States. His career started on the “bolting up gang” for about a year, learning the ropes from older Mi’gmaq ironworkers. His brother-in-law, Peter Caplin, another well-respected Mi’gmaq ironworker, then recruited him to join him as a connector where Ken spent the next 22 years.  Throughout his career, he has helped to build bridges, high rise buildings, paper mills, silos, nuclear power plants and in the last couple of years he has lent his expertise to the construction of wind towers.

Part of Ken’s career was spent operating heavy equipment.  With no formal training, he spent a number of years operating a timber jack in forestry operations and operating a loader in construction projects and snow removal programs.

Ken came out of semi-retirement to build the Mi’gmaq wind park –Mesgi’g Ugju’s’n. An important project, for Mi’gmaq, by Mi’gmaq.

Frank started his career on iron at the age of 17, following his brothers Arnold and Danny Boy to Houston, Texas.  With the guidance of his brothers in Mi’gmaq, he had no problem starting on a “bolting up gang” and quickly joined the ranks connecting with the “raising gang”.  At the time, he didn’t even have a social security number, so his brother Danny helped him with the local Business Agent.

Frank is also an experienced heavy equipment operator, having grown up around his father’s businesses in forestry and construction.  From a very early age, Frank became quite skilled at operating logging trucks, timber jacks, bulldozers, etc.  To gain work outside the community, Frank took a heavy equipment operator’s course in Fredericton to obtain his certification.

Today Frank is sought after by many across Gespe’gewagi, bringing his skills and work ethic to varied job sites. 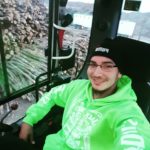 Kyle received certified training as a bricklayer with the U.S. Job Corps in Presque Isle, Maine.  When he learned of the upcoming construction opportunities related to wind park development in the territory, Kyle enrolled in a heavy equipment operator training program with the Atelier-ecole les Cedres outside of Montreal.  Since graduating, Kyle has worked on several wind park sites, road building projects and pulp mill operations. 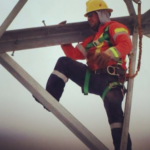 Shane successfully completed a 900-hour DEP linesman program at the Commission scolaire des Navigateurs in St. Henri, Quebec.  Since then, he has been climbing the ranks and gaining experience on a multitude of regional initiatives, including wind parks and the Hydro Quebec dismantling project. Upon completion of his training, he worked in Fort McMurray, British Columbia, Calgary and Grande Prairie. A proud Mi’gmaq, he works alongside three other Listuguj linesman , together they have built a reputation for being some of the most skilled and competent tradespersons in their field. 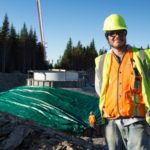 Jonathan found his calling as a linesman helping to construct and maintain electrical transmission lines and distribution systems for wind parks.  Jonathan completed his accredited training with the Commission scolaire des Navigateurs in St. Henri, Quebec.  He went straight to work out West, gaining valuable experience and building a team with his fellow Mi’gmaq linesmen. He has worked for both Valard Construction and on the Cartier Energy Gros Morne Wind Farm as a Linesman. Jonathan also possesses expertise in a number of other trades, including experience as a construction labourer, classroom training in carpentry and has experience as a concrete finisher.