A proud history on work on the high steel 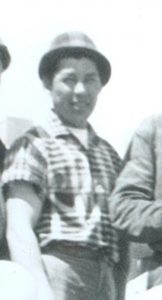 The men of Listuguj enjoy a proud history of work on the high steel, helping to build America’s sky-scrapers and bridges.  For decades, iron workers have travelled to major cites across the New England states including Boston, New York City and Hartford to work in this dangerous high-paying trade.

Without the prospect of jobs in their community, the iron workers would leave for months at a time to provide for their families.

Here is the story of one elder, Tom LaBillois, age 83, as told to his daughter.

Dad, tell me how did you became an iron worker?

“It was the late 60’s, potato pickin’ in Maine just finished and there wasn’t much work around here [Listuguj].  Either you cut pulp in the woods or got one of a few carpentry jobs in the Spring.  My friend Larry [Basque] said let’s go look for work in Bangor with the ironworkers.  So, this put the idea in my head.  I talked to my cousin Pat Cool [Martin] who was already working on the iron with Isaac Metallic in the States.  He told me to write to Newfoundland to get my application. He said that’s the easiest way to join the union.  So, I wrote and got a form for Natives in the mail.  Apparently, when your Native heights are not supposed to bother you.  I already had a welding course I took on the reserve, but not enough hours for apprenticeship.

Pat told me I needed steel toe boots and a helmet.  I used my brother’s helmet, it was maroon colour and written Bethlehem Steel.  It was too small for me, so I had to adjust the harness to fit.

It wasn’t like now where everyone has a car.  Back then, Isaac had a little sports car to fit two people.    So, four of us got on, with our Samsonite luggage [garbage bags], spud wrenches hanging out. 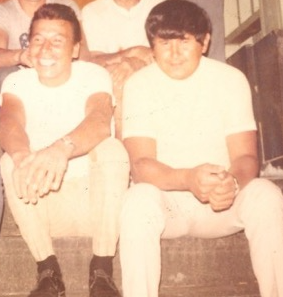 We arrived in Hartford around midnight, we didn’t sleep there though. We went to next town over, Meriden.  The next morning, we had breakfast and Pat told me let’s go, don’t get excited, don’t look at anyone, just pretend you’re an ironworker.

When we got there, I showed my papers from Newfoundland, and for Natives they don’t ask questions, just get up there.  The union in Hartford was local 15.  The building we were putting up was for Traveller’s Insurance.  Victou Jij [Joe Martin] was already on the job, so we all spoke Mi’gmaq with each other.  We were making $20/hour; that was big money at the time.

When we finished the Traveller’s building, we went to New Haven to work a building at Yale University, the building was almost complete by time we got there.

In 1969/70 we went to New York City, working 3 floors underground on the foundation of the Twin Towers.   I never thought I would see them come down…”